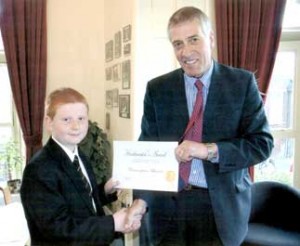 At age 8, Christopher from Oldham was diagnosed with Asperger Syndrome, an autistic spectrum disorder. His parents were told that this was a lifelong disorder and that there was no treatment as such.

Chris struggled with poor co-ordination, sleep difficulties, and had particularly low self esteem and confidence. Alan and Pam decided to bring Christopher to BIRD after hearing from the parents of another child who had been treated at the centre and had become more self-confident and less stressed as a result of the programme. “We tried not to have too high expectations when we first cam to BIRD, but they were the only people to offer a treatment of Chriss condition, rather than ways of managing his symptoms they gave us hope” says Alan.

It was 3-6 months into treatment before improvements became noticeable; for the first time in his life, Christopher slept through the night and his anxiety levels dropped noticeably. Since then Chris has made steady improvements with self confidence, gross motor skills and hand-eye co-ordination.

“He has made the transition to mainstream high school since starting at BIRD and has coped much better than we ever imagined” says Pam.