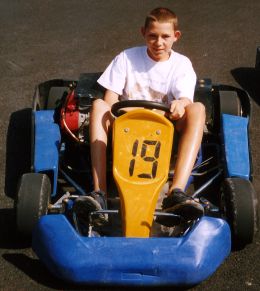 When Scott Jehan entered the world in 1991 it was a traumatic introduction. His mother, Tracy, had to undergo an emergency caesarean section and Scott spent the first two weeks of his life in a special care baby unit.

“That first fortnight was unbearable,” says Tracy. “Scott was my first child and I longed to hold him close. Instead, we had to watch him in the incubator with tubes and monitors attached.”

Tragically, a brain scan revealed that a blood vessel on the left hand side of Scott’s brain had burst during his birth. Tracy and her husband Michael were devastated.

“We simply had no idea what to expect at the time. Naturally, we feared Scott would be brain-damaged, but we knew that brain injury takes many forms and varies enormously in its severity.”

“He seemed completely unaware of the existence of his right hand and we could only open it by forcing it with two hands,” explains Tracy. Thankfully, Scott’s learning abilities were not hugely affected by the brain injury; only his physical movement was impaired.

“It was an enormous relief to know that Scott wouldn’t necessarily have learning difficulties,” says Tracy. “But he was painfully shy and lived in his own little world. He attended a mainstream school but found it difficult to make friends and was very slow to read.”

Tracy and Michael were told that Scott would never be able to use his right hand.

“As an example, we were told that Scott would never be able to hold a yoghurt pot. Whilst we knew that the medical professionals had Scott’s best interests at heart, we also felt that he’d been written off’ to a certain extent.”

Determined not to give up, Tracy wrote to BIRD after seeing a television programme which featured our work.

The clinical team carefully guided Scott, Tracy and Michael on a programme of exercises they were to practice each day which are designed to take the brain back to the basic development that should have happened during Scott’s first months of life.

“All of a sudden, things just seemed to click,” says Tracy. “When you see someone every day, you don’t notice changes – but friends and family who saw Scott every few weeks would comment on how different he seemed. He became more confident and would make eye contact with total strangers and his reading age improved remarkably.

“One morning, Scott appeared in our bedroom showered and fully dressed. It was the best present I ever had and would have been totally unimaginable 12 months earlier.

“He still doesn’t use his right hand in day to day tasks, but it is becoming looser and he definitely can hold a yoghurt pot in it!”

Tracy and Michael don’t know what further improvements Scott is capable of making and they are naturally reluctant to allow themselves to set their sights too high. But they are now totally confident in his ability to lead an independent life.

“We have hope now,” Tracy says, “before BIRD, we had all but lost it. Scott has recently started secondary school and one morning during his first week there – when I must have been looking particularly anxious and protective – he said it’s ok Mum, you don’t need to worry about me I’m fine’ and I thought yes Scott, you certainly are.”