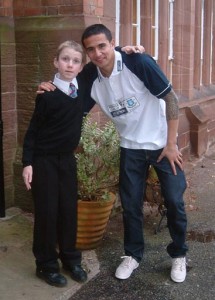 The first few months of Sam Corner’s life following his introduction to the world in Chester in July 1997 were just like those of any other child. His Mother, Karen, and father, Simon, were delighted that their second child seemed a happy and healthy baby.

But after six months, Sam’s parents began to be concerned. Sam didn’t seem to be developing in the way that his older sister Becky had. “He made no attempts to sit up whatsoever,” says Karen, “and he seemed floppier than you would expect a child to be at that age.” They grew increasingly concerned as time passed by. When the Health Visitor agreed that Sam’s development wasn’t meeting the expected milestones of a child his age, Karen and Simon were both devastated and relieved at the same time:

“It was a relief, in a way, that there was official confirmation of what we’d been fearing over the previous few months,” says Karen. “At least now, we thought, something will be done to see what’s wrong with Sam and we can make some progress. We were terrified of what might be wrong, though, and when the Paediatrician mentioned muscular dystrophy, we feared the worst.”

Thankfully, the tests for muscular dystrophy proved negative and a brain scan revealed no discernible problems. But when he was 15 months old, Sam was referred to Alder Hey Children’s Hospital where he was diagnosed with cerebral palsy. Karen’s world almost fell apart as soon as she heard the words “cerebral palsy” used by the Neurologist.

“We were terrified. I had a mental image of someone in a wheelchair with no communication at all. I knew hardly anything about cerebral palsy and thought at the time that there was little hope of anything approaching a ‘normal’ life for my baby.”

Over the years that followed, Karen and Simon learned a lot about the condition affecting their son. They learned that his mental abilities were totally unimpaired, but that his ability to control his physical self was severely affected as, therefore, was his ability to communicate.

Sam went to a special pre-school and had specialist therapy such as physio and speech therapy. He started to walk a little and to attempt to speak, but when Sam entered the specialised speech unit of a mainstream primary school, his development seemed to stagnate.

In desperation at Sam’s lack of progress, Karen began to look into alternative forms of therapy. A friend of a friend whose child had developmental problems to her about BIRD and was extremely complimentary about the therapy available and the progress her own child had made. Karen and Simon read through the website and decided to make an appointment for Sam.

“When we first went to BIRD, we had very high hopes,” says Karen. “The theory behind the therapy seemed to make a lot of sense to me – and it was refreshing that it tried to address the underlying problem rather than the ‘symptoms’ such as speech delay.”

When BIRD’s Clinicians first assessed Sam, they diagnosed him as having 82% “organic brain dysfunction”.

“This is a very high score,” explains BIRD’s Clinical Director, Dr David McGlown. “Basically, it means that Sam’s reflexes hadn’t developed in the usual way. Many of the primitive reflexes present at birth should be gradually shed as children mature, but in some cases, this process is inhibited. A typical level would be under 30%.”

At the start of 2007, Sam and his parents started out on BIRD’s unique therapy. Sam’s specifically designed exercise programme takes around half an hour each day and trains the brain to re-learn its primitive reflexes.

Karen soon began to notice subtle changes in Sam’s development as his therapy progressed. He became gradually more coordinated and was able to take swimming lessons for the first time. His handwriting gradually became legible and he was able to ride a bike for the first time – he can now even ride without stabilisers in a big space. She was so impressed with the progress that Sam made, that she decided to take Sam’s younger brother Joe to BIRD for treatment as he was suffering from a general developmental delay.

“It’s hard work going through two different exercise regimens with two young boys every evening,” says Karen,” but we’ve learned to enjoy the quality one to one time it gives us with each boy – and you get out of it what you put in. Each time we go back to BIRD, the therapists can see the progress Sam is making. And he loves going as the staff are always so good with him. It’s been a long road, but he now measures 61% on the scale BIRD uses and the improvements are obvious to see for anyone that knows Sam. It’s wonderful to witness. He’ll always have cerebral palsy, but thanks to BIRD, we know we can now enable Sam to reach his own true potential. That just wasn’t happening before.

“He’s much more confident, now, and he’s happier. That’s the single most important thing. Before we came to BIRD, we were always aware that Sam was a very bright boy but, tragically, he was trapped in his body. He’s able to come out of himself much more now and to communicate far better.

“No-one tells you about this kind of treatment and that’s a great shame. If we could have found BIRD sooner in Sam’s life, I’m convinced he would have made far more progress – but I’m just thankful we found BIRD when we did.”