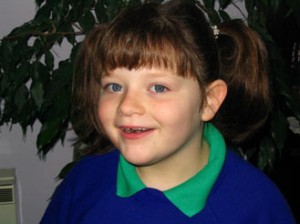 Sophie Commons was Alyson’s third child. As an experienced Mother Alyson was as confident as any parent can be, during the first months of Sophie’s life, that everything about her development was just as it should be. In fact, It wasn’t until Sophie was eight months old that Alyson began to have any kinds of concerns. “When the Health Visitor came for Sophie’s eight month check, she observed that Sophie couldn’t sit up unassisted,” says Alyson, “but we still weren’t all that worried at the time.”

As time progressed, however, it gradually became clear that Sophie wasn’t developing at the usual rate for a child of her age. Alyson and her husband Kevin grew increasingly worried about Sophie’s progress and began to seek specialist medical advice – going as far as a brain scan at Great Ormond Street Hospital which revealed no brain damage or specific, identifiable problems.

“This was a very difficult time for us,” says Alyson. “We knew Sophie wasn’t developing as you would normally expect and we couldn’t just sit back and accept it. Yet we had nothing to really go on from a medical point of view.”

By the time Sophie reached four years of age, her lack of balance and co-ordination meant that she still needed a baby-walker to walk at all, and she couldn’t communicate with her Mum in any meaningful way and couldn’t yet say “Mummy”. Yet Alyson and Kevin still had no diagnosis of Sophie’s condition.

They became more determined than ever to seek out new avenues of support and guidance to help Sophie and it was purely by chance that Kevin picked up a copy of the Daily Express at work one day and read the remarkable story of a young girl from York with similar problems to Sophie, whose life had been totally transformed.

“Kevin brought the paper home and when I read the story of Olivia from York, it gave me renewed hope for Sophie and we decided to make contact with the organisation that had brought about this remarkable transformation – and that was BIRD.”

At Sophie’s first appointment, it was abundantly clear to BIRD’s experienced Clinicians that Sophie’s reflexes had not developed in the usual way from the baby stage as she grew.

“The primitive reflexes present at birth are gradually shed as children grow,” says BIRD’s Chief Executive. “But this process is inhibited in certain children like Sophie. When she first came to us, Sophie measured 82% on the scale used to measure organic brain dysfunction, whereas a typical level would be under 30%. This level manifested itself in her basic reflexes and behaviour. For example, Sophie had very poor co-ordination and communication for a child of her age.”

BIRD’s Clinicians showed Alyson and Kevin a set of specifically-designed exercises for Sophie to practice each day with their help that would encourage her brain’s development and inhibit the infantile responses.

The exercise regimen was carefully altered at each assessment stage as Sophie progressed. After a year, Sophie’s neurological dysfunction reflexes were reduced by 24% and she was beginning to show real signs of improvement. By this time, she could walk unaided reasonably well and was able to start at school.

Sophie continued to make steady improvements over the next two years and is now at a level considered “normal” on the scale used to measure development, though she still has problems with communication and co-ordination when compared to children her own age. Her treatment programme through BIRD has now come to an end.

“People who haven’t seen Sophie for a while comment on just how much she’s improved,” says Alyson. “Her balance is so much better. She can really get along at a pace now and is constructing sentences; it’s a joy to see compared to how she was a relatively short time ago, and she’s improving day by day.

“Without BIRD’s treatment, I don’t think Sophie would have been able to walk and talk. And if my husband hadn’t happened to glance at the newspaper at work, we wouldn’t have found BIRD. It was a like fate was taking a hand.

“Sophie’s specialist told us that nothing more could be done to help. But obviously there was more we could do. I just wish we’d found BIRD earlier.”