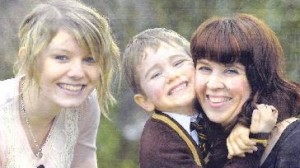 Luke is six years old and is Autistic.

Six months ago, Luke could barely communicate. His mother, Julie, had to fight to get him from the car to his primary school each morning. He couldn’t form sentences and would kick and scream. Often, Julie needed a teacher’s help to get him to the classroom as Luke continually threw tantrums.

Today, Luke is calm, communicative, excels in maths and other academic areas, plays football twice a week, goes swimming once a week, has joined a street dance troupe, enjoys socialising with friends and family and bears little resemblance to the boy he was such a short time ago.

The seemingly miraculous transformation in Luke is a new and fascinating story to most people who hear it – but not for the people working here at BIRD who have witnessed similar transformations many hundreds of times.

When Julie first heard about BIRD’s work, she was understandably dubious: “The headmaster of the primary school that Luke attends organised an evening at the school to explain BIRD’s work, because they’d helped his daughter, who has Asperger’s syndrome, a milder form of Autism,” she says. “He told us about the amazing improvements he’d seen in his daughter and was sharing this with us because he thought more children could benefit. When he explained how BIRD’s treatment is based on exercises that aren’t strenuous that you do with your child for half an hour each day, I thought to myself: ‘How can that possibly work?’ But I’d nothing to lose so I decided to give it a go.”

But by this time, Julie was ready to try anything as Luke was virtually uncontrollable.

“I couldn’t even take him into a shop. He’d go ballistic because of the noise and light. At the age of four, he couldn’t talk at all, but I was determined for him to go to a mainstream school. He improved at school, but still didn’t communicate. When he moved up from the Nursery to Reception class, the teacher made a line of toy elephants for him to follow each day so that he’d go to the new classroom as he was obsessed with elephants at the time.”

When Julie decided to take up the BIRD programme the charity’s clinicians taught her about the exercise programme and how the treatment methods work. She was amazed when she began to see almost immediate improvements in her son.

Today, Luke has improved beyond all recognition and is continuing to get better day by day. His treatment programme still has around 12 months to run.

Julie is delighted with Luke’s progress. “I set my alarm for 6.30 each morning, get the children’s things ready for school and go through the regimen with Luke. I say ‘it’s BIRD time’. He loves it now.

“The changes are simply unbelievable. How the exercises can change someone so much is just remarkable. I feel incredibly grateful and privileged to have found BIRD when I did. They’ve transformed Luke’s life completely”.