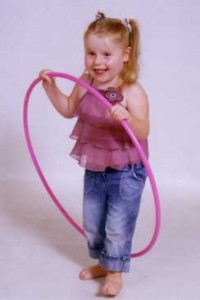 Michaela suffered from a lack of oxygen to her brain at birth which led to a range of developmental difficulties. Michaela’s parents had to face the possibility of living with a severely disadvantaged child – their little girl was unable to walk, talk, crawl, stand or even sit up alone.

After beginning treatment at BIRD, the family noticed an almost immediate change in Michaela.

“Within two weeks she had started crawling which she had never done before! I was ecstatic and brought to tears by her progress” say’s mum, Kay. Michaela is making a steady improvement; she is starting to make progress with sign language and will engage with people a lot better.

“Michaela’s progress has been amazing but families must be aware that there is often a great deal of hard work to be undertaken when starting treatment” said BIRD’s Clinical Director.

However, the rewards are well worth the effort; Michaela is now walking, pointing at things she wants and shaking her head for yes and no. She attends main-stream play school which she walks to and from. Every six weeks the play school give her three targets and she meets these every time. She has become more vocal and is getting independent and knows her own mind. “The change in her is more than we could have hoped for” says mum Kay.